What is it in us that makes us climb mountains? If there is a place on this world inimically hostile to us, it is the snow-strewn peak of everest. And yet, every year hundreds of people spend tens of thousands of dollars each to put themselves through a grueling physical hell to reach the roof of the world. Not all of them come back. The Lyric’s newest production, Everest, is the true story of one who did. 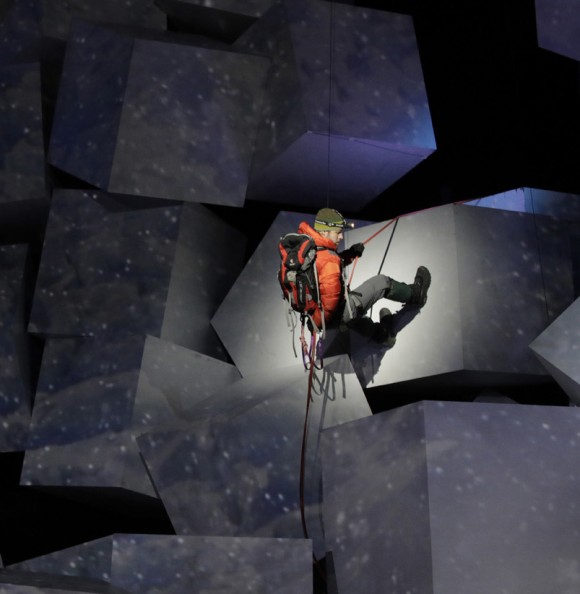 The one-act opera is based on the 1996 Mt. Everest Disaster, in which eight people died on the mountain due to a particularly vicious blizzard. At the time, it was the deadliest single event in Everest history, now unfortunately no longer the case. Dr. Beck Weathers (Michael Mayes, bar), left behind by the climbing group due to eye trouble, fades in and out of consciousness as he fights not to succumb to the extreme temperatures. Meanwhile, seasoned guide Rob (Andrew Bidlack, ten) escorts climber Doug (Craig Verm, bar) to the top, and works to get him back down alive. Meanwhile, Rob’s wife Jan (Sarah Larsen, mez), heavy with child, waits and frets for news that he has returned to base camp.

Everest is a very new production, having premiered in Dallas in 2015. It is the same production that is being presented here, with Robert Brill’s amazing scenic design. Gene Scheer’s libretto is stark but powerful, putting a lot into a little. There are elements of minimalism here, as indeed in Joby Talbot’s haunting score. The story moves fluidly from one section to the next, with no real act/scene division. Performers scramble over the sets, loved ones far away fade in and out of view. And all around, the chorus of climbers watch and sing, ghosts of those the mountain has claimed for its own.

On the premiere performance Saturday, the audience was fortunate to be able to meet the composer and librettist, and Dr. Weathers himself. They talked of the incident, and of the process that turned it into such a striking operatic performance. Dr. Weathers is, not surprisingly, a fascinating person to listen to. When the Everest climb ended his mountaineering for good, he decided to take up something different — he became a pilot.

This reviewer has spoken before about the taking of risks, and branching out in untried directions. In theatre, so as in life. Everest is definitely a twenty-first century opera, eschewing traditional operatic notions in favor of new musical sensibilities and modern staging ideas. It is deeply compelling, and Kansas City is fortunate to be able to have this performance here.

The fact is, sometimes something in us needs mountains. In a way we cannot perhaps explain, the drive to push ourselves harder, endure more grueling challenges, live life closer to the edge manifests in all but the most pedestrian lives. If we climb the mountain because it is there, perhaps it is there because we must climb. But when we do climb, as the 290-plus known people who died on Everest may attest, one must always bear in mind the price.