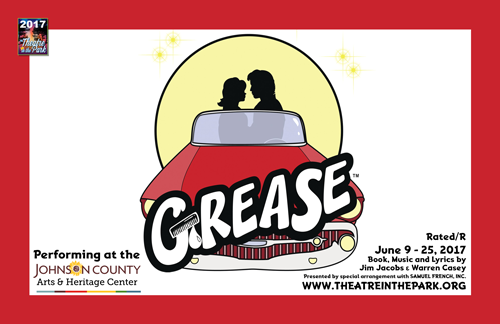 We all know Grease was an iconic movie of the late 70’s. It blended the feel of the 70’s with the music of the 50’s and was a huge hit that solidified John Travolta as a bonafide movie star. The musical was first performed in Chicago in 1971 and quickly made the move to Broadway in 1972 and ran for 3,388 performances, setting a record for the longest run at the time. Even today, it ranks as the 15th longest running show. Last weekend it opened as the inaugural show for Theatre in the Park’s new indoor facility at the Johnson County Arts and Heritage Center. That means air conditioning and leave the bug spray at home.

If you haven’t heard about the center, you will soon enough. It’s a wonderful space with the Johnson County Museum, arts and performance classes, a Kidscape area and much more. The new 76,000 square foot building has much to offer and will help expand Theatre in the Park to a year round company. Considering the nostalgic White Haven Motor Lodge sign visible from the lobby, Grease makes a great show to christen the new 245 seat theater with.

If you’ve somehow managed to never see the movie or musical, Grease is a musical about Danny Zuko (Zane Champie) and Sandy Dumbrowski (Genevieve Austin) who are from different sides of the tracks, but who meet over the summer and have a sweet and innocent summer together. Danny is a greaser and head of a gang at high school with a bad boy image. Sandy goes to a religious school. Their relationship ends with the last days of summer, but the musical begins on the first day of school when Sandy starts at the public school instead of her old private school. She finds Danny, but not the Danny she knew as he quickly covers his excitement at their reunion to protect his image.

Danny’s group of hoodlums, complete with leather jackets, include Doody (Lucas Lowry), Roger (Colin Rohach), Kenickie (Spence Gochis) and Sonny (Gerald Briscoe). The group harasses, cajoles and argues but they are like family. Man lover Marty (Brit Bowman), tough Rizzo (Meredith Hollan), frumpy Jan (Rachael Field) and Sweet Frenchy (Emily Vargo) are the Pink Ladies, who take Sandy under their wing while harassing cheerleader Patty Simcox (Natalie Crane) every chance they get. Vargo does an amazing job with Frenchy, capturing the innocence and angst. She just makes you smile when she’s on stage.

The only parental figure is the strict English teacher Miss Lynch (Lindsay Day) who is admired by Eugene (Cameron Mabie), the token geek of the show, and feared by the boys. Mabie embodies the stereotypical geek with delightful enthusiasm, while Day plays the slightly out of touch authoritarian Lynch perfectly.

Rounding out the cast is Jessica Alcorn as the funny, over the top dancing drama queen Cha-Cha DiGregario and Delano Mendoza as both Vince Fontain and Teen Angel. Mendoza is just too young to play the smarmy local DJ Fontain who hits on Marty at the dance, but as Teen Angel he excels. His Beauty School Dropout has a true show-stopper ending.

The story is often reminiscent of a more innocent time, but at other times reminds us that the trials and tribulations of high school transcend the generations. Peer pressure, bad choices, teenage angst, pregnancy scares, protecting your image and trying to figure out who you are and what you want are peppered in with some classic 50’s feeling music and dancing.

Director Tim Bair has brought together a great cast. He also brought out the individuality of the characters that add to the layers of the show and has captured the 50’s feel. The entire ensemble brings energy and focus to the stage and makes for a fun outing. What was lacking Sunday, more so for the boys than the Pink Ladies, is that sense of camaraderie and the vigor of youth. The deeper connection that “we’ll always be together” isn’t completely fulfilled. And while Champie and Austin look and sound the parts as Danny and Sandy, we never quite see the love and excitement that create all the angst that drives the story.

The cast looks very period. Jenny Green embodies the 50’s down to the rolled up jeans and the pink silk Pink Ladies jackets. John Holland’s hair styles are a lot of fun but I found Zuko and Doody lacking the iconic greased back DA look.

The cast does a fantastic job with the music and the dancing, which is what musicals are all about. Music director Marsha Canaday brings out all the 50’s nuances and the cast sounds great. She also leads the onstage ensemble of Matt Fischer, Sean Caballos, Joe Gall and Morgan Less, that significantly enhance the experience.

Lucas Lowry’s rendition of Those Magic Changes was absolutely captivating. He has an amazing voice that just makes you want to hear more. The entire cast sings well but unfortunately the sound mix is problematic at times. The iconic Summer Nights loses some of it’s shine as the soloists and their words, and thus the comedy, get lost in the band and the ensemble blend. This recurs throughout, more for the Zuko and the boys for some reason.

Liz Ernst has really brought this cast to life with her choreography. The entire ensemble shines and the larger numbers, like the classic Born to Hand-Jive, leave you smiling. The only issue is that this is a ¾ thrust stage, which means the audience is on three sides. The challenge is you need to play to three sides not just one. The choreography and some of Bair’s blocking didn’t quite take into account the audience on the sides so when you pick your seats, take the front over the sides if you can. Unlike traditional Theatre in the Park productions where there is open seating, this new venue has assigned seats so I highly recommend buying those tickets in advance.

If you find yourself waxing for some 50’s nostalgia or just wanting to see a well put together musical that hits all the right notes, put on your pommade, roll up your jeans, jump in your DeSoto and head over to the new Johnson County Arts and Heritage Center for this slick production of Grease.

Grease runs Thursday, Friday and Saturday at 7:30 with Saturday and Sunday matinees at 2:00 now through June 25th.