I’ve said it before and I’ll say it again: the key to a long happy life is to never be a soprano in an opera. In “Rigoletto”, the story of the titular jester is punctuated when his deeds bring about the defilement and death of his daughter, who is –if anything–utterly blameless.

Rigoletto (Leo An, Bar), a deformed hunchback, is the court jester of the Duke of Manuta (Scott Quinn, Ten)., who is something of a love-’em-and-leave-’em type, taking his pick of the ladies around him, married or otherwise. For this reason, Rigoletto keeps his daughter Gilda (Nicole Haslett, Sopr) under lock and key, only letting her out to go to church. Alas, it is there she and the prince spot each other, and she falls for him utterly. Meanwhile, some of the Duke’s courtiers–thinking she is the jester’s mistress–kidnap her and take her to the Duke. When he finds out, Rigoletto hires the assassin Sparafucile (Peixin Chen, Bass) to do away with the duke. Gilda learns of the plot, however, and manages to die in his stead. When RIgoletto discovers this, he is torn with grief. 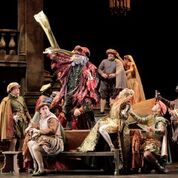 There’s a lot to unpack, here. There seemed to be a trend in Victorian era opera for women to be mere plot devices, there to be contested for, won, or lost. And if they wound up dead at the end, so much the better. Granted, there are exceptions (Verdi’s own La Traviata comes quickly to mind), but really sometimes it seems like the only agency women in opera have in their life is in taking it. The courtiers who abduct Gilda are presented as little more than boys being boys, the abduction mere wacky hijinks. If it really had been the hunchback’s mistress, one gathers, there would have been no problem at all. Even the Duke’s famous aria, “La donna è mobile”, combines a beautiful melody with lyrics that wouldn’t seem out of place on a 4chan comment board.

Director David Gately has opted for a traditional setting for this production. And while this reviewer personally thinks the story absolutely screams for a modern setting, she must confess that it does indeed work extremely well as-is. The scenery and costumes (from sister companies in New Orleans & Chicago, respectively) really bring out the decadence of the world in which the story exists. Saturday’s debut performance was beautifully executed, with An bringing dignity to his role as the eponymous hunchback. Ms Haslett’s Gilda is positively heartbreaking in her innocence; her radiant joy in Act I makes the looming shadow of the end all that more tragic. David Charles Abell conducts the orchestra ably, wringing out every bit of emotion in Verdi’s music.

Watching this, one is forced to compare it to the modern day. We live in a world where women still must fight non-stop for the right to be regarded as adults. Here and there are signs of hope–the #metoo movement, the ouster of powerful men. Drops in a bucket, perhaps, but enough to make one feel that perhaps, at long last, the tide is turning. But it is a long way from where it ought to be. Men scheme and plot, women are used and thrown away, and still the Duke is out there singing, oblivious to it all.